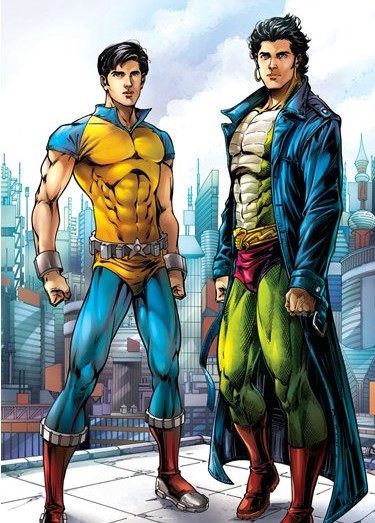 Two of my favorite characters growing up were Nagraj and Super Commando Dhurva, superheroes with their own unique powers.  While Nagraj would make use of snakes and poisonous breath to kill and defeat his adversaries, Super Commando Dhurva was more acrobatic, skilled both in fighting as well as riding his motorcycle.

Most of the summer afternoons would be spent reading these comic books, even though initially I used to put them inside the school textbook pretending to be reading it while enjoying the heroic feats of these two superhumans.

If Marvel and DC comics could create legends out of their characters, I wonder how we could not do something like this with these two.  The entire India is in love with the Avengers though none belongs to India.  Even I myself is a big Iron man, Captain America and Batman fan, but still feel we need to have a superhero who was born in India and would show a preference for saving India first then the USA.

Super Commando Dhurva is a savior for Rajnagar and works his magic with the skills he learned during his childhood while working in a circus.  He could ride his bullet on thin ropes and use his agilities to win over any opponent.  He also learned to speak with the animals while working in the circus, a skill widely used by him to crack unsolvable crimes. If we could get the right person to play such a character, I am sure we could have a winner at hand.

In addition to these two, the third Raj Comics character I was enamored by was Parmanu.  Although not as strongly portrayed as Nagraj and Super Commando Dhurva, he drew his power from his suit especially designed to give him superhuman ability to fly at the speed of sound and even teleport.

Out of these three characters, Super Commando Dhurva is the only one to use his intellect and physical prowess along with fluid agility to win over his rivals.  With an incredible knowledge of science and an ability to speak and use multiple languages he is unassailable as a superhero.

One thing I would really like to see is people in India relating with a superhero of their own.  Although, I have serious doubts on Bollywood to make a decent enough movie with such characters, involving international studios can help in getting the right technology to create a movie with the right kind of story and application which is able to showcase the true strength of their character.

Although, Bahubali did created a landmark for others to follow, the characters in that movie were operating on a different level.  But, I still feel a director like Rajamouli with his experience of making such a magnum opus could use similar thought process to create a superhero we all would love to see every year.

Bahubali has ended after two parts, a movie on Super Commando Dhurva or Parmanu, though can carry on much longer.  We will not only have superheroes to talk about but also admire and possibly meet.  If the right technology is used with an appropriate story line without trivializing the honesty of the character, I am sure we can create a winner out of them.

The best thing would be, we will get an opportunity to not only relieve our childhood memories but this could also rekindle the child within us and the hope of having a superhero around.

And yes of the current actors, I think Vidhyut Jamwal has the right physique to play Super Commando Dhurva, though, there is lot of work left to do as far as acting is concerned.

If you are one of the fans, do comment and let me know if you also think likewise or have a different opinion.